All the Y and Z blocks have been constructed and the applique blocks fleshed out to 24.5", so I placed what could fit onto the design wall.

The only fussy placing I did was to make sure there wasn't a black or very dark log next to the borders of the applique blocks. Although this is a nice size as is (4'x6'), especially for a wall hanging, I've still got those 24 Z blocks that will complete the design/layout I've chosen. I was briefly tempted to set them aside for a different project to be thought up later, but then realized I'd rather have a large quilt doing double duty as a wall hanging, than a lap-sized wall hanging that isn't much good for anything else.

Meantime, these are starting to show up: 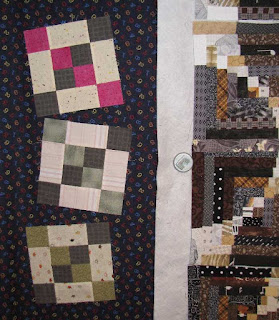 As mentioned before, I'm using pieces from my 2-1/2" scrap container, so these are finishing out at a hefty 8-1/2" square. They won't all have that dark check-ish fabric in them. It was just coincidence that the first 3 did. 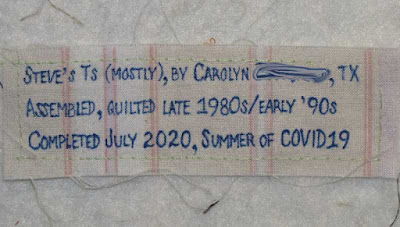 Fixed it! Now it's clear most of the T-shirts are The Loud's, instead of seeming that I only did most of the assembly, quilting, and completing. (I hear Billy Crystal's voice saying, "...your friend here is only mostly dead.")
Posted by cbott at 8:58 AM No comments:

While technically not vintage, this project has been lurking around for literally half my life. 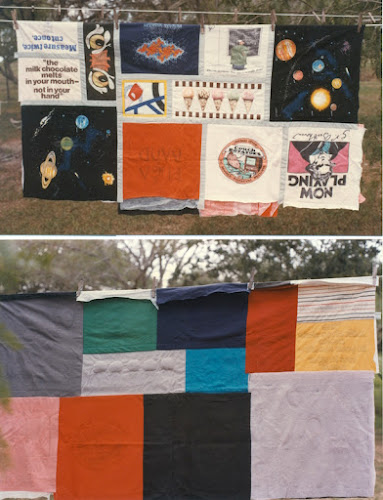 Rather than waiting their turn and letting me work on a single log-cabin project, three more projects have muscled their way to the head of the line. 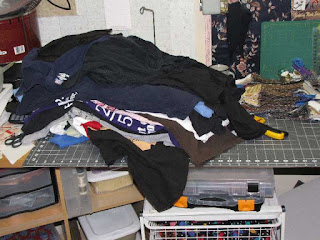 At the end of June, Mary (of Making Scrap Quilts From Stash) posted about a T-shirt quilt she was making. After having myself made one for a friend and having two more lurking about unfinished, the scales finally fell from my eyes. In an email exchange with her I wrote:

"The thing that struck me the most was: T-shirt quilts always seem to be made as gifts for others, never as a quilt for oneself! I just pulled, easily, 20 T-shirts from my drawers and hangers to assemble into a lap quilt for me. Why oh why did it never occur to me to make something for myself?!? Isn’t it funny how a chance comment or picture from someone else turns your whole perception of How Things Are on its head?

Also, I’m thinking that a lap quilt infused with my smell might finally compel the cats to snuggle with my husband if he throws it over himself. Otherwise, to them he’s just the Provider of Food."

I (finally) noticed this during the last round of ironing: 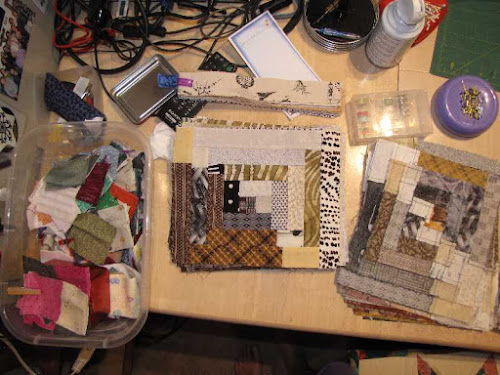 but instead of being all

I'll let it exist without giving it a second glance. Zen and the Art of Quilt Construction.

Just taking a quick reckoning after ironing the current round of logs, seeing how things are playing together. 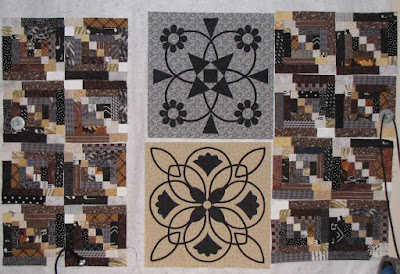 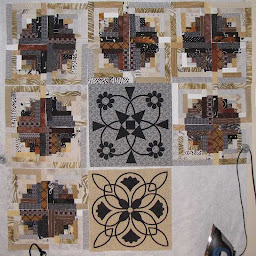 The more the blocks build out, the more they look as they should. There's still a block in which I didn't replace the funky black & white fabric, and that's throwing off the curve by 3/8", but I'm not "mad" enough at it to rip it out. It's what it's.

Now that the blocks are getting assembled and some problematic "neutrals" are being called into play, I'm taking a close look at things before they go too far. This medium-orange-ish log had me on the fence--could I convince myself it was light enough to count as a neutral, or did it lean dark?
I built out the block on the design wall to see how it might play with subsequent rounds of logs. 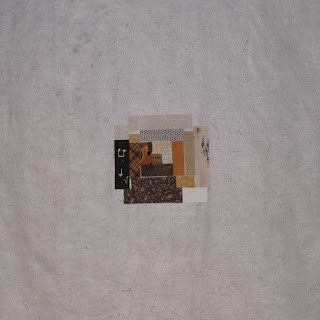 I took pictures (obviously), squinted hard at it, considered creating a black & white version of this shot, then realized in the time it took me to do all that, I could have ripped out the 3-1/2" of stitching and replaced that log with something that didn't bother me at all!
So I did that instead. 1441 logs cut, and counting.
Read more »
Posted by cbott at 7:45 AM 2 comments:

Been matching and sewing in spurts of 56, small neutral units sewn to longer dark units, getting them all sewn before turning on the iron. 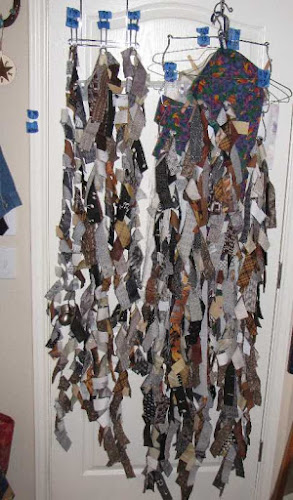 I don't like to keep the iron plugged in all day for a little ironing here, a little there, unless the project absolutely requires it. Even with the auto-off feature, it still draws power unnecessarily. So all these are hanging about waiting for the ironing marathon to follow.
Read more »
Posted by cbott at 9:23 AM 2 comments: 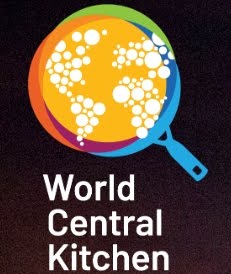